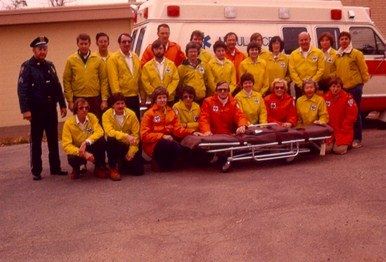 For much of the City of Sun Prairie's history, the Police Department was responsible for responding to medical emergencies in the community and providing ambulance transportation for the sick and injured. Then, in the late 1970s, Dane County published its plan for Ambulance Districts, intent on developing the outline by which Emergency Medical Services could be delivered to all residents of Dane County. In June of 1977, then Police Lieutenant Carlyle Wilkinson (who'd been managing the volunteer ambulance service at the time) recommended to the City Council that it develop its own ambulance service. Thus, the Sun Prairie Emergency Medical Services agency began in October of 1977.

By early 1978, there were 34 volunteers on the Sun Prairie EMS roster, including current Alderperson Mary Polenske and current Mayor Paul Esser. In 1985, volunteer EMT Don Wadyka was appointed to be the very first EMS Director. Working limited hours and paid a stipend, he was succeeded by Director Mary Polenske in 1990, who, due to the agency's growth and increased demand for service, later became the first full-time Director.

Since its inception, Sun Prairie EMS volunteers dedicated themselves to providing emergency care and transportation to the sick and injured for over 20 years, and relied on nearby City of Madison Fire Department for assistance with more serious incidents when paramedic-level care was necessary. In early 2000s, the City of Madison notified the City of Sun Prairie that it was no longer able to provide paramedic-level care following the current business model; and so on August 9, 2004 the City of Sun Prairie took the bold step of increasing its EMS service delivery to paramedic level and becoming a full-time career agency. Director Polenske led the agency through this transition and was instrumental in positioning Sun Prairie EMS for a healthy and sustainable future.

When Director Polenske retired in 2008, EMS Director James "Kep" Anderson joined the team. At the beginning of the economic recession, demand for EMS services dipped by just over 100 calls annually, and the agency was challenged to continue to meet the community's needs on a tight budget. By 2016, the economy had recovered, the City was growing again, and demand for EMS increased by 15%. In 2017, the City restructured the EMS Department and Training Officer Eric Lang took over day-to-day management of the Department while a nationwide search was conducted for a new EMS Chief. In January 2018, EMS Chief Brian Goff took the helm and looks forward to the challenges of leading the agency through the City's continued growth and meeting the ever-changing needs of a dynamic and diverse community.  Chief Goff led the department through the COVID-19 pandemic, and made a number of other operational changes, such as the addition of a peak-hours ambulance to better serve the residents of the City of Sun Prairie and the Town of Bristol.  Chief Goff departed in early 2022, and Sun Prairie EMS came under the purview of Chief Christopher Garrison who has been leading the department since.

On January 1, 2023, Sun Prairie EMS began its next chapter by providing service to not only the citizens of the City of Sun Prairie and the Town of Bristol but extending its care to include the Village of Marshall and the towns of Sun Prairie, Medina and York.  In this service area consolidation, Sun Prairie EMS reaffirmed its position as a leader in the field of emergency medical services by actively taking steps to use resources efficiently at a good value to the taxpayers, while ensuring high-quality care to the residents that it serves.

Since its beginning, the City of Sun Prairie Emergency Medical Services department has adapted to an ever-growing demand for services from both within the City limits, as well as from its neighbors. Today, the Sun Prairie EMS department protects over 50,000 citizens in a vast service area in the northeastern part of Dane County. The paramedics at Sun Prairie EMS responded to almost 4,000 calls for service in 2023 in the City of Sun Prairie, the Town of Bristol, and neighboring areas of DeForest, Marshall, and Madison.  As the service area and population that Sun Prairie EMS serves expands in 2022, the department expects the demand for its services to increase as well. For many of its neighbors to the north, west, and east, Sun Prairie EMS is the only advanced-life-support provider and is a critical public safety partner.