Join us in Cannery Square to celebrate the 74th annual Sun Prairie Groundhog Prognostication on February 2, 2022! Jimmy the Groundhog has an extremely high accuracy rate on his annual predictions, making him an outstanding leader in meteorological circles. Businesses and organizations throughout the City of Sun Prairie will be offering many Groundhog Day specials on February 2nd. Check out Downtown Sun Prairie's Facebook page for more information on activities happening all around Sun Prairie.

For over 50 years, the Sun Prairie members and supporters have been proclaiming Sun Prairie to be "The Groundhog Capital of the World." This proclamation has caused reverberations from the halls of Congress, to the coal fields of Pennsylvania, and in the news media of the country. Groundhog Day is tied to Candlemas Day, a centuries old celebration day in Europe. Folklore states: "If the day is bright and clear there'll be two winters in the year." The Groundhog Day tradition in Sun Prairie, Wisconsin dates back to 1948, when Wisconsin celebrated its centennial year. Many ways were found to commemorate the centennial event, both public and personal. One such private observance was a rather ambitious project. A commercial artist, Ira Bennett, of Eau Claire, Wisconsin and his young son decided to create a series of commemorative post cards relating various locations in Wisconsin to the holidays throughout the year. Some of the cities chosen were: Independence, Wisconsin for July 4th, Port Washington, Wisconsin for Washington's Birthday, Loyal, Wisconsin for Boy Scout Sunday (a scout is loyal). Groundhog Day required a stretch of the imagination. The groundhog sees his shadow when the sun comes up on the prairie, thus, Sun Prairie was picked for the honor.

At that time the postmaster in Sun Prairie was Margaret McGonigle, a lifelong resident, active in politics and a promoter of the virtues of Sun Prairie. When this idea was presented she quickly asked the artist his permission to use this idea to further promote the community. Soon after, the Sun Prairie Groundhog Club was organized as a sort of serious spoof. All people born on February 2 were eligible to be groundhogs. Those born on other days in February were designated woodchucks. The word spread and birth certificates were mailed to folks all over the country for a nominal fee.

Ground hogging really hit its stride in Sun Prairie when the 4-H Club and its leaders, Erich and Teena Lenz took over. Erich, never one to do things halfway, immediately got live groundhogs and always had one ready for the ceremony. Dan Royle, the newspaper publisher and neighbor to the Lenz', made his contribution to the legend with his recipe for Moose Milk, a hot milk drink with the kick of a moose (liquor). The celebrations were held at the Lenz home on Pony Lane, with their ample home bursting with media people, local politicians and anyone else who wanted to be there at sunrise. Telephone calls came from TV and radio stations all over the country wanting to know if spring was at hand or if we were in for six more weeks of winter.

Each year, the groundhog group had a different scheme to attract the attention of the country. One year, two stuffed groundhogs were married in a wedding ceremony. This gave rise to a declaration by Wisconsin Congressman Glen Davis in the Congressional Record that Sun Prairie groundhogs were "legitimate" and that those in Pennsylvania were otherwise. This of course prompted an equally frivolous response from the Punxsutawney congressman, all printed in the Congressional Record. Congressman Davis has a Sun Prairie street named in his honor. When Sputnik was the subject of conversation, the groundhog was sent to the moon by rocket to keep up with the Russians.

All this high-jinx did not go unnoticed by the groundhog club in Punxsutawney, Pennsylvania who claimed prior rights to the title. Good natured ribbing has been the order of the day since the start. One year the Pennsylvania rodent didn't see his shadow and Sun Prairie's Jimmy did, the locals pro-claimed the reason was that their animal's eyes were full of coal dust and of course couldn't see his shadow.

1889: "This is a lovely day warm to Sun Shine the Ground Hog … could see his shadow at 12:00 noon, so we may take it for granted that the winter is not half gone." Diary of Col. Willliam H. Angell, 1886-1891, Sun Prairie Historical Library and Museum archival collection.

1891: "Cloudy to fine snow all day; the Old Ground Hog could not see this shadow today at 12:00 noon, according to the old adage the winter is more than ½ gone." Diary of Col. William H. Angell, 1886-1891, Sun Prairie Historical Library and Museum archival collection.

1948: As part of the Wisconsin Centennial celebration, many communities sought symbols as part of its community promotional efforts. Sun Prairie Village Postmaster Margaret McGonigle agreed to adopt the groundhog as a symbol for Sun Prairie. The first groundhog postcard was produced in 1948.

1950: A carnival dance was held at the Tropical Gardens Dance Hall.

1951: The event took place at the American Legion Club at the same time that a formal groundhog funeral took place at Angell Park.

1959: 'Prince Dauphine the Groundhog' was preserved by taxidermy and is on display at the Sun Prairie Historical Library and Museum. The event took place at Angell Park.

1961: It is reported that Sun Prairie resident Ray Patt picketed the Sun Prairie Star Countryman for printing a groundhog prognostication, which contradicted the Groundhog Club's forecast.

1963: The story concluded with 'Prince Dauphine the Groundhog' returning from the moon after a twelve-month space mission, landing in Angell Park, where the event seemingly took place.

1976: Prairie Heritage Quilters produced the Prairie Quilt. 'Prince Dauphine the Groundhog' was "quilted" as one of Sun Prairie's historic personages. The quilt won a First Premium at the Wisconsin State Fair. This quilt is only displayed at historic events.

1982: The event was moved from the home of Erich Lenz to Feldman's Supper Club. This move from the friendly confines of the Lenz home destroyed the dynastic celebration of toasting Groundhog Day with Moose Milk. State regulations prevented Moose Milk from being served in a public gathering place. Sun Prairie resident Dan Royle developed the secret recipe as the 'Jimmy the Groundhog' official drink. Moose Milk was an early morning adult beverage, refreshing many adults who attended the ceremony. Alternative beverages were served to children and to abstaining adults. Everyone seemed to enjoy the free pastries that were also served to Jimmy's guests.

1983: The Sun Prairie Chamber of Commerce assumed the care of 'Jimmy the Groundhog'. Jimmy's new caretakers and Keepers of Faith were Sun Prairie residents Ted and Cheri Krisher, who lived on a farm just outside of Sun Prairie.

1994: The event took place at Knights of Columbus Round Table.

2004: The event took place at the Colonial Club.

2012: The event took place at the Sun Prairie Chamber of Commerce Office / YMCA of Sun Prairie.

2015: An over enthusiastic Groundhog bit the ear of Mayor Jon Freund, making for a very memorable event, which generated a substantial amount of media interest as the story quickly went viral. The event took place at Cannery Square in Downtown Sun Prairie. 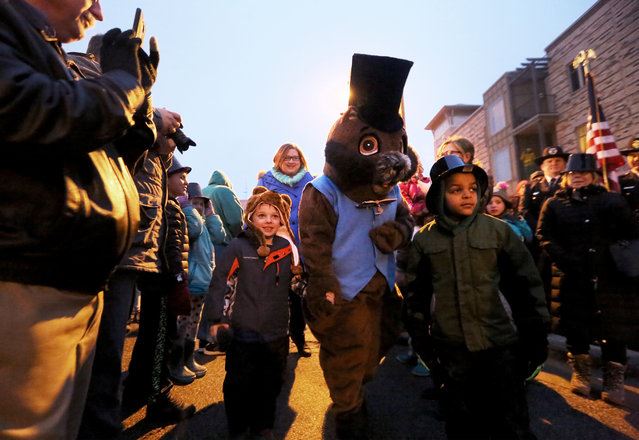 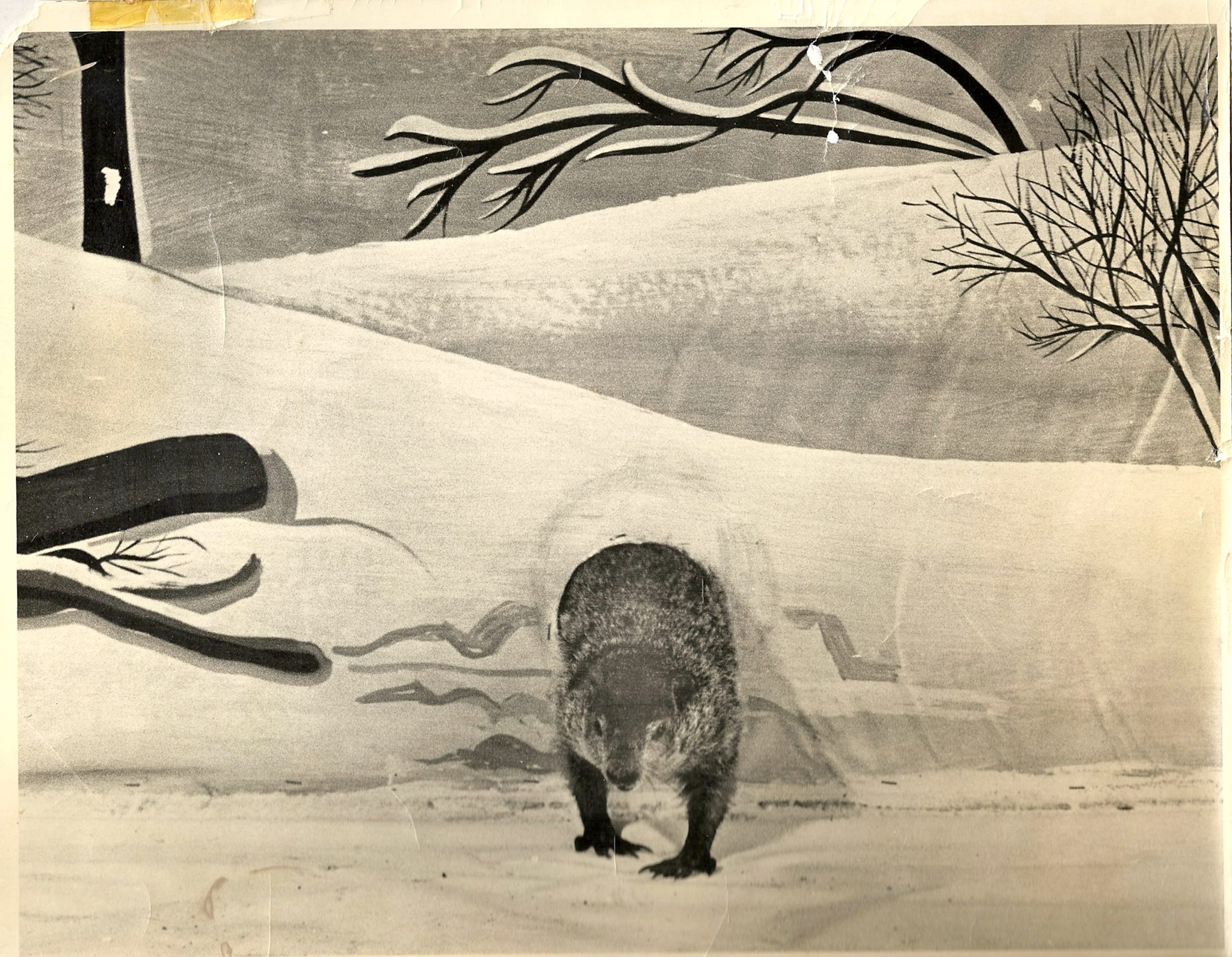 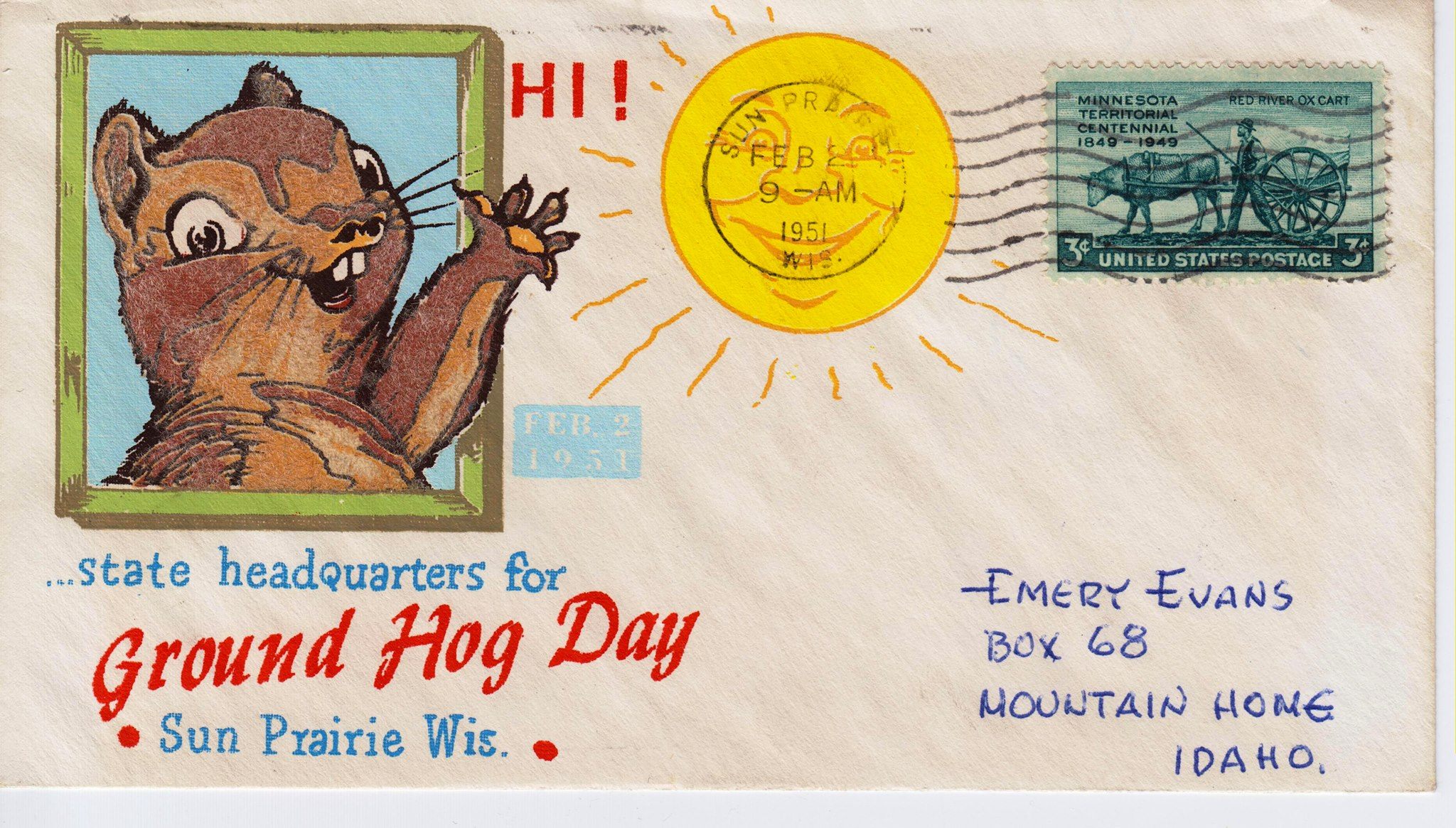 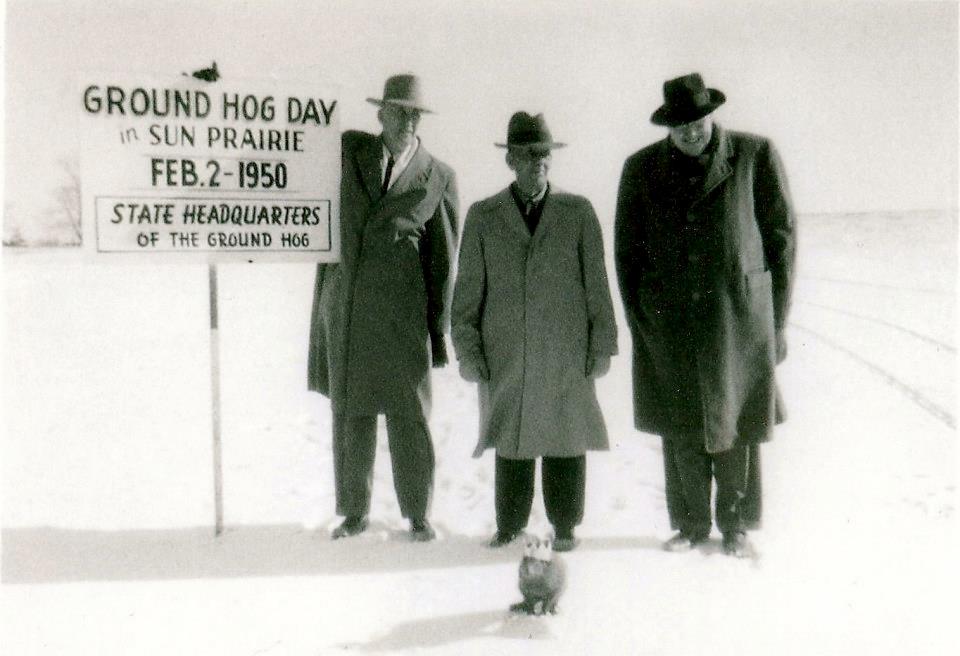 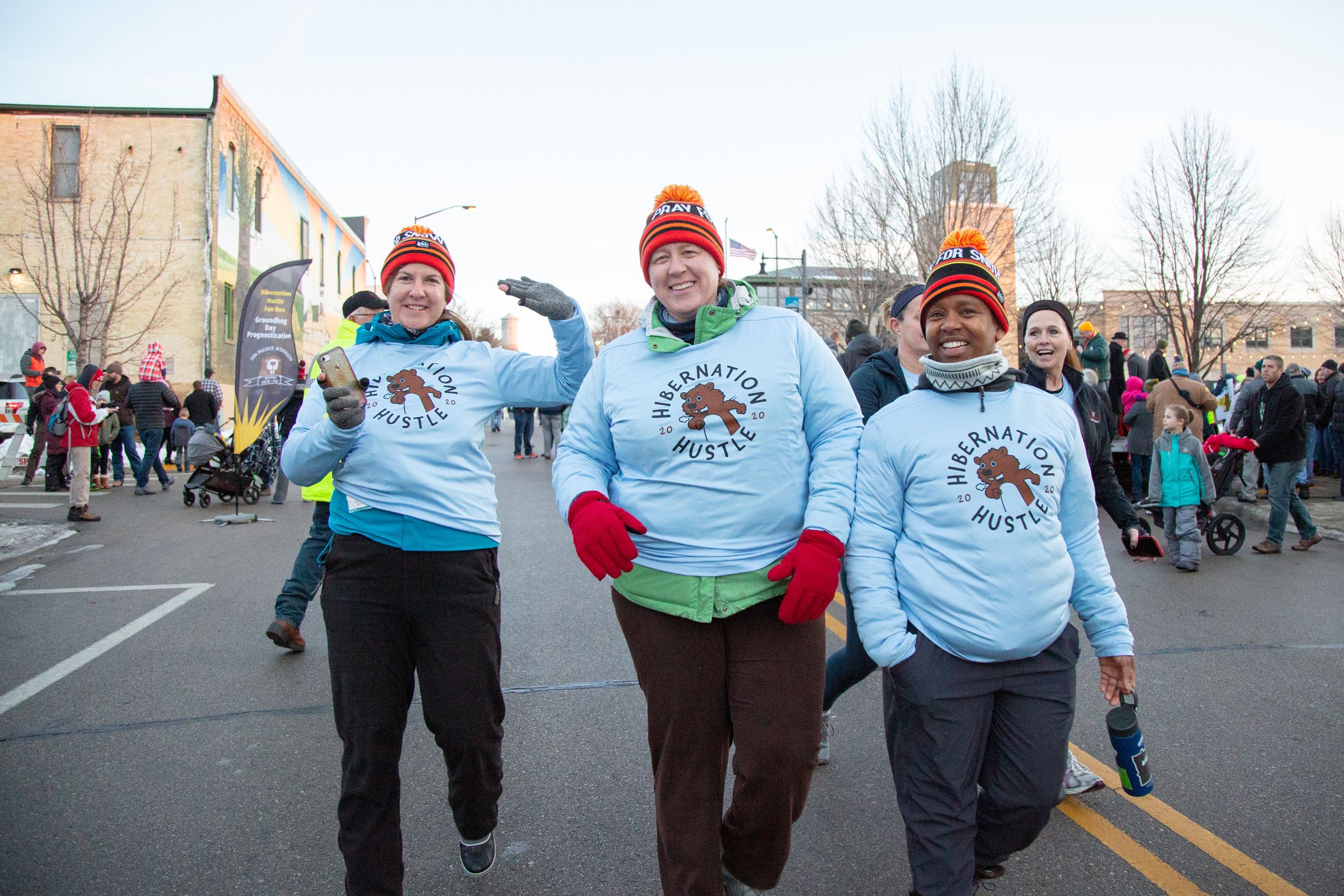 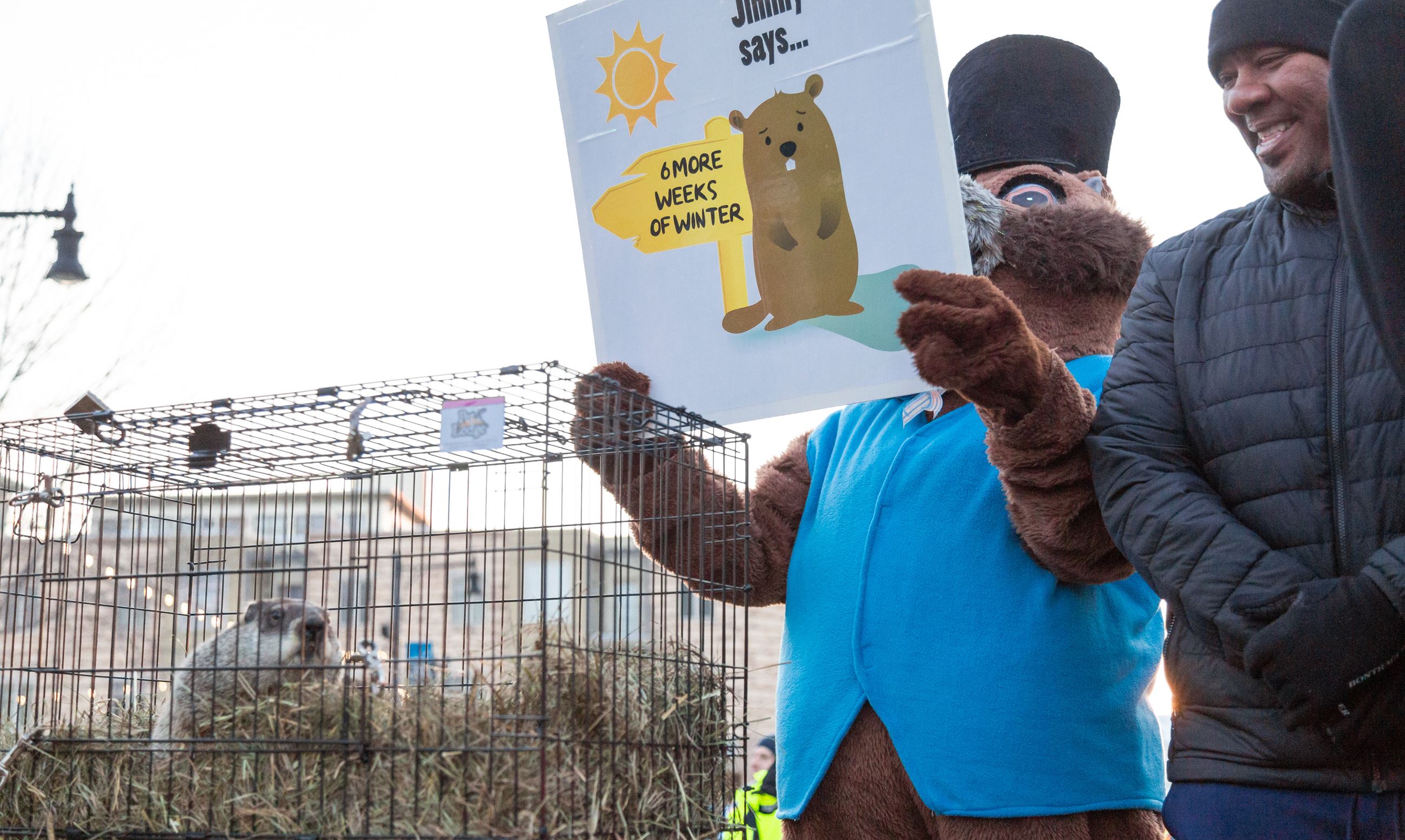 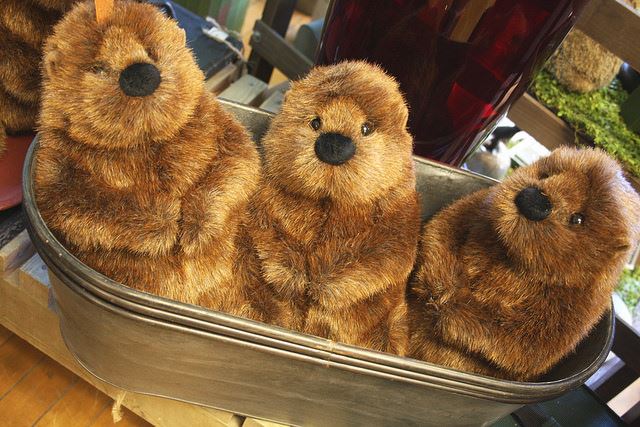 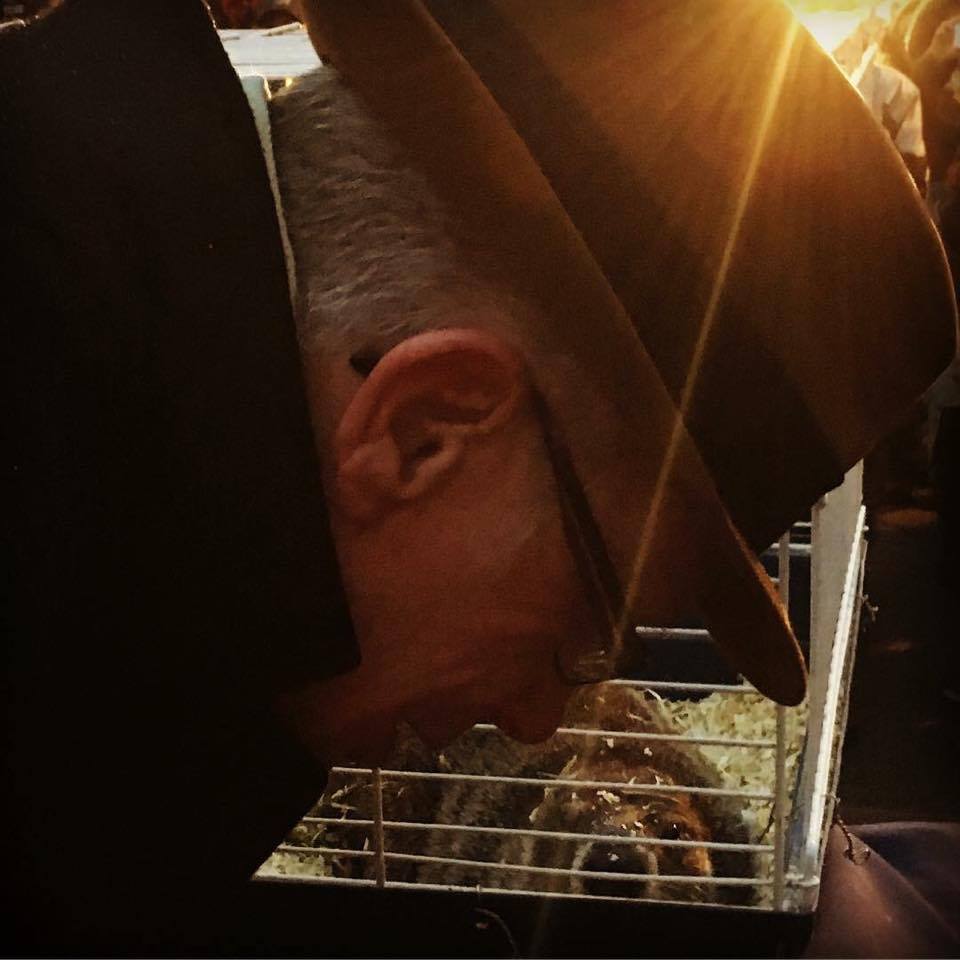