The City of Sun Prairie, Parks and Forestry Division, will be conducting an Emerald Ash Borer (EAB) awareness campaign over the next several months. The goal of the campaign is to bring awareness to the community of what the EAB is and its potential impact on Ash trees in the city.

Ash trees will be marked with an orange ribbon by city crews. Crews will be moving from west to east 1 subdivision at a time. For more information, please visit Wisconsin's Emerald Ash Borer website.

Recently, Ash trees around the state have been prematurely dropping their leaves shortly after the trees leafed out. Due to loss of leaves, affected trees have a thinner crown compared to nearby broad-leaf trees of different species.

Frost / freeze events occurring after the buds had started to swell or after buds had already broken damaged newly expanding leaves or caused tender leaves to die.

Other tree species that may be affected include:

Additionally, the fungal disease Anthracnose, was able to infect some leaves this spring causing dead spots on the leaves. Ash trees will purge these damaged leaves. When you look at Ash leaves that prematurely fell to the ground, they will have black / brown blotches on green leaves and many of them are curled up or distorted. 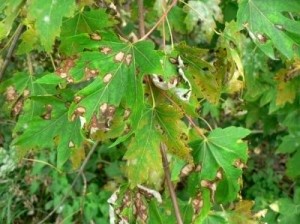 The leaf disease, Anthracnose, is commonly seen when the spring weather is cool and wet. Leaf damage tends to be more severe on the lower crown of a tree if Anthracnose is the culprit whereas frost damage will be more severe in the upper portions of the tree and the outer edges.

Although Ash trees may drop the majority of their leaves, the tree will attempt to send out a 2nd set of leaves and will look much better the rest of the season. Once leaves mature, temperatures increase, and spring shower season ends, the problem usually subsides. No control is necessary for yard trees although it is a good idea to maintain the overall health of the trees by watering during dry periods, properly mulching, and minimizing injuries to the tree.