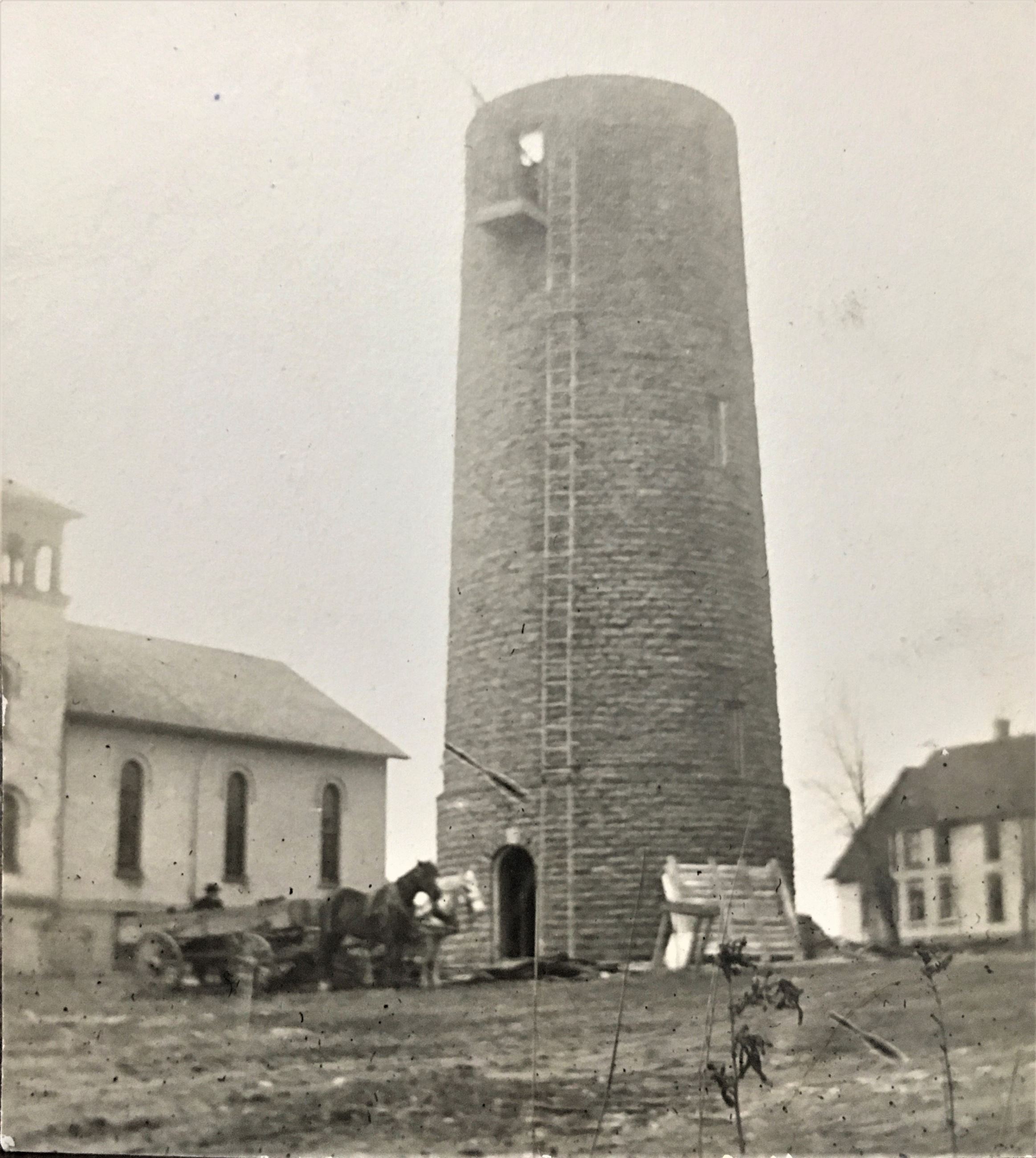 THE WATER TOWER at 200 Columbus Street

The Columbus Street Water Tower was built over 100 years ago in 1899 as the first Public Works building for Sun Prairie. The need for a water tower was decided by the village council after a disastrous fire had burned many buildings in the downtown area during the early 1890’s. Both electricity and water was brought to the village as it continued to grow.

Construction of the water tower began in September 1899 and it was completed by December. The first use of the tower was on December 14, 1899 when the water system was tested for the first time. The first tank was constructed of wood and was replaced with a metal tank in 1912. The stone for the tower were reclaimed from tearing down Steven’s Mill which was located northeast of Sun Prairie.

The tower is 92 feet high and is 25 feet in diameter at its base. The walls are 2 feet thick at the base and they rise as a cylinder up to 11 feet above the ground. The walls reduce to 20 inches thick and tapers to 12 inches thick as a truncated cone to 60 feet above the ground. The metal water tank is 20 feet in diameter and 30 feet high and held 70,000 gallons of water. The water was contained only in the tank, not in the stone portion of the tower as many believed. Inside there is a stand pipe which held the water into the tank and caused pressure in the water mains throughout the village (now the city). The ladder at one time scaled the outside of the tower, but due to safety reasons it was placed inside of the structure to gain access to the catwalk around the base of the tank. The ladder extending from the catwalk to the top of the tower wa for access to the inside of the tank for cleaning purposes. An overflow pipe is found on the north side of the tower. The purpose of the pipe was to allow excess water to overflow into the street below to keep the pressure on the water mains fairly constant.

The tower was in operation for 93 years and closed down in 1992. Facing demolition - - a big push was made to save this historic landmark. The Columbus Street Water Tower Board was created by a City ordinance in April of 1993 and it was charged with the responsibility of restoration and maintenance of the tower.

The tower was found to have been placed in a public right-of-way, thus no one can claim prior ownership to the land. The restoration that has been completed to date includes cleaning and pointing the stonework both inside and out of the tower, replacing the windows and doors, one window etching honors Martin O. Feuling, former Post Master of Sun Prairie, painting the metal tower surfaces, placing 690 commemorative bricks in the James Reininger Plaza and placing decorative pipe and chain fencing around the tower.

A Centennial Celebration took place on December 14, 1999 as a commemoration of the historic tower.